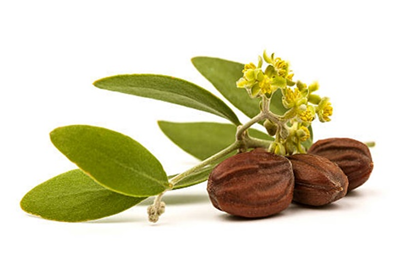 JOJOBA GOLDEN OIL – A tip of chemistry for the “golden” oil, which is actually not an oil!

Imagine a desert… Α small woody shrub, Simmondsia chinensis, with seeds that look like wrinkled long hazelnuts, which give us Jojoba golden oil, one of the top lipids used in premium cosmetics.

But in fact, this golden oil is not oil!

It is a liquid wax, as it is a mixture of long chained linear wax esters in a high percentage of about 97%, combined with tocopherols (vitamin E), free sterols and other unsaponified ingredients.

These linear esters of liquid wax give to Jojoba oil its wonderful properties, as they are resistant to hydrolysis and oxidation. Thus, they make Jojoba Golden Oil an effective ingredient not only for photo protection, but also for maintenance of skin’s and hair’s hydrolipidic balance.

The molecular configuration of natural Jojoba esters is wonderfully simple, symmetric, and stable. They have amazing cosmetic multifunctionalities, as they are remarkably similar to the esters that make up 25-30% of human sebum.

Jojoba Golden Oil is extremely resistant in high temperatures and therefore its quality does not easily degrade. It also has a remarkable resistance to oxidation and therefore, Jojoba’s natural liquid esters stabilize the active ingredients of cosmetic products that are prone to oxidation.

Jojoba mixes easily with the sebum of the skin, forming a very thin, slightly porous oily layer, which allows transdermal respiration, but at the same time reduces water loss. Unlike other materials such as Vaseline, mineral oils and some lanolin products that act as skin blockers, jojoba is not sticky and oily, enhances the elasticity and flexibility of the skin, while leaving a rich and velvet feeling on it.

Jojoba oil is quickly absorbed by the pores of the scalp and hair follicles and penetrates the stratum corneum. Thus, it deeply moisturizes and softens the skin and hair effectively.